As readers of Vergil we recognize the name of Eryx, son of Venus and therefore half-brother of Aeneas. Legend makes Eryx the eponymous founder of the settlement of Erice atop the mountain of the same name. We took the cable car up there in the late afternoon to catch the sunset. There is nothing left to be seen of the Temple to Venus that Aeneas is said to have established there. Nor of the tomb of his father, Anchises, who Vergil tells us expired there. Drepanum, modern Trapani, juts out, sickle shaped, into the sea at the foot of the mountain. It is not difficult to understand why he might have chosen this beautiful setting for such dedications. It is also tempting to imagine Mt. Erice as the vantage point from which Juno might have looked out to sea to find the Trojans setting off from Sicily on what they hoped would be the last leg of their journey to Italy. Off she then flew to the floating island of Aeolus not far off to wheedle out of him the ferocious storm that would blow them to the shores of Carthage.

Selinunte, the city of wild celery and Megarian Greeks situated on Sicily’s southwest shore, saw the defeat of Carthage at Himera in 480 BCE as an opportunity to expand unchecked. For 70 years Selinunte prospered from agriculture and trade and its inhabitants built up their beautiful city without concern for the threat their success might pose to their neighbors, most notably Segesta. A defeat of Segesta would have given Selinunte control of a contiguous strip of land from the southern to the northern shore of the island. It apparently came as a complete surprise when Carthage answered Segesta’s plea for aid and arrived at Selinunte’s gates in 408, bent on destruction. Our first stop was at the quarry of Cusa to see the colossal columns in production for the building program in the city a few kilometers away. The workers had apparently dropped their tools and headed for the hills when the sounds of the attack reached them. From the quarry we proceeded to the city to see the results of the Carthaginians’ handiwork. It took 7+ students linking hands to encompass the girth of the one column of the great temple of Zeus that the sackers had left standing.

One of only a few towns associated with the ancient Elymians, Segesta had a long history of trying to survive as Athenians, Syracusans and Carthaginians squabbled over Sicilian territory. Its temple, never finished, may in fact have been a successful attempt to woo Athens’ support in its continuing struggle to keep Selinunte from spilling over its southern border before Carthage had put an end to that threat in 408. So much switching sides turned out to doom Segesta’s original inhabitants. As Sparta got the upper hand in the Peloponnesian War, Segesta’s alliance with Athens proved toxic. They tried to make nice with Agathocles, tyrant of Syracuse, an ally of Sparta. They welcomed him into their city, only to have him turn against them, plundering, enslaving, torturing, killing the entire population, and eventually resettling the town with Doric Greeks. Was he making a sick joke when he renamed it Dikaiopolis, city of the just?

The island of Motya was originally a Phoenician outpost connected to the mainland by a causeway, now submerged but still visible to excursion boats that navigate the lagoon surrounding the island. Here pre-Punic colonists harvested salt for trade. Motya salt is still gathered today, and dotted around the lagoon defunct windmills that once pumped water from salt pond to salt pond stand sentry to the hordes of kite-surfers who thrill to the same powerful winds that used to power the mills. The Phoenicians on Motya also produced purple dye from the now-extinct murex shellfish. The island was purchased in the early 20th century by James Whitaker, an independently wealthy British ornithologist and amateur archaeologist. Here he lived with his family and was free to dig and delve to his heart’s content. In the decades since his death, numerous sites on the island have been excavated systematically including a dry dock, stretches of fortified walls, a necropolis and a tophet. Finds from the excavations are exhibited in the museum housed in Whitaker’s former residence. One spectacular find occurred in 1979 when the earth of the island offered up a larger-than-life-sized classical Greek marble statue, the Charioteer of Motya, whose presence on the island remains an unsolved mystery, but serves as a significant draw for visitors to the region. 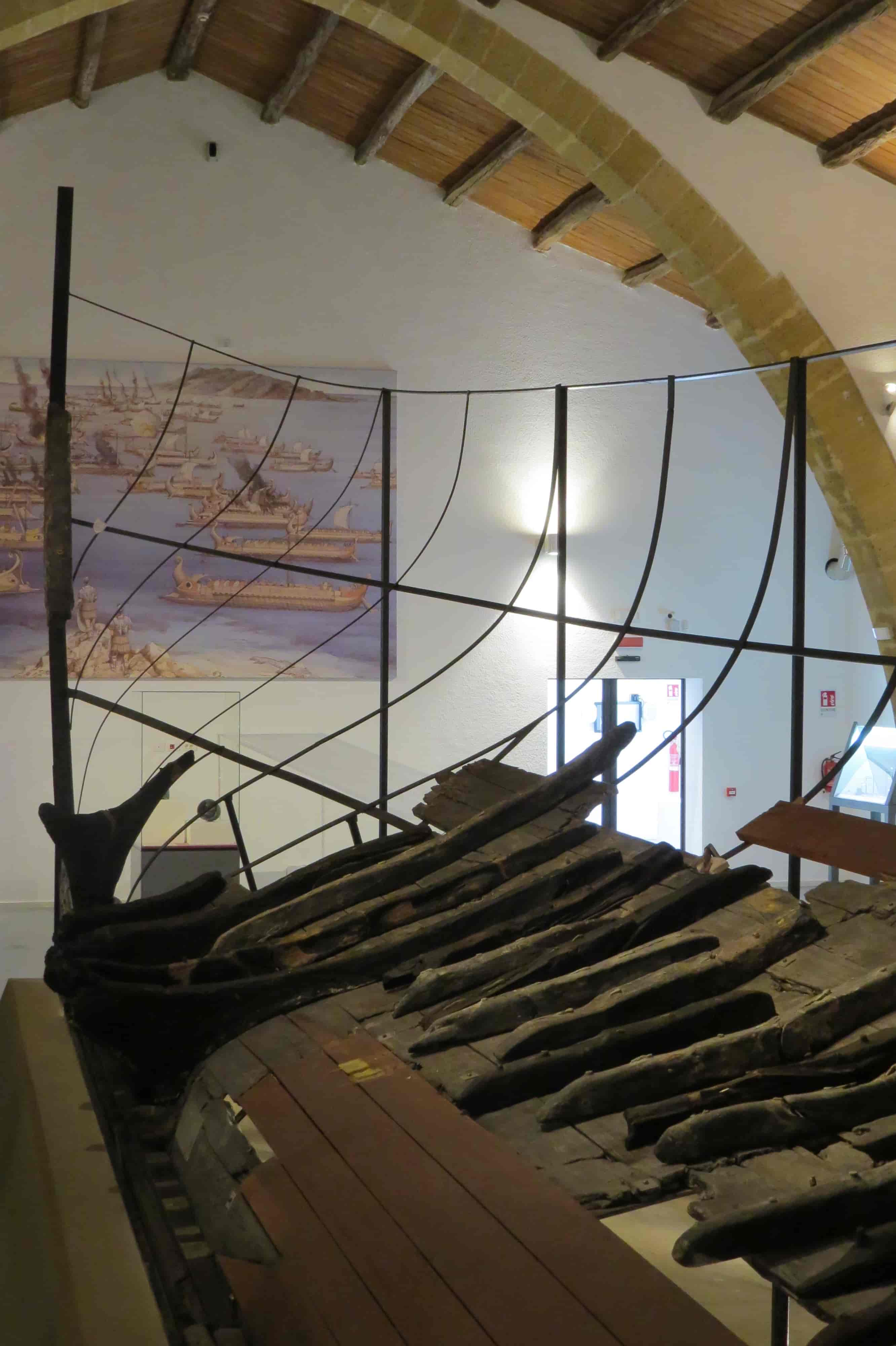 Marsala, Roman Lilybaeum – ‘the town that looks at Libya’. Cape Boeo, within the city limits, is the closest point on the island to the African continent. The town has a fascinating history dating all the way back to its foundation as a Phoenician refuge and stronghold after the island of Motya was destroyed by Sicilian Greeks in the early 4th century, BCE. Still in Carthaginian hands, it played a pivotal role in the naval battles of the 1st Punic War. Cicero did a marvelous job as quaestor here and upon his return to Rome learned to his chagrin that his accomplishments had gone completely unnoticed. Flash forward to the mid-19th century when, as the opening salvo in his victorious campaign against the Bourbon Kingdom of the Two Sicilies, Garibaldi’s thousand rag-tag, red-shirted volunteers marched up the street into downtown Marsala through the gate now bearing his name. But all this tantalizing history aside, our destination was the Archaeological Museum at the Baglio Anselmo, a repurposed 18th century winery that used to produce . . . Marsala! Here among many treasures brought up from the earth and the sea in the vicinity, a Punic ship, thought to have gone down during the Battle of the Egadi islands in the first Punic War has pride of place. Another featured artifact, a Venus statue of the Callipige (beautiful buttocks) variety, a Roman copy of a Hellenistic original, was fortunate, due to its relatively late manufacture (1st – 2nd century CE), to have escaped the depredations of wicked Verres. 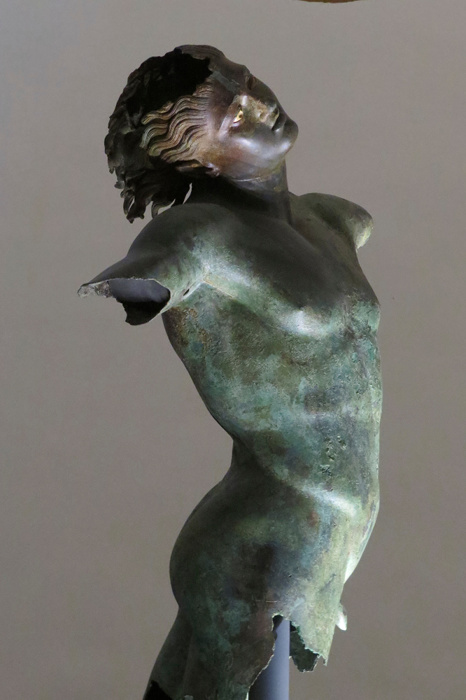 In Mazara del Vallo we made a beeline to the decommissioned church of San Egidio to see the Dancing Satyr. The Satyr has returned to the site of his discovery (in 1998) after he was fixed up in Rome and displayed to the world at the Louvre. The details of his journey to the bottom of the sea off the coast of Mazara are unknown. This much is clear: the fact that he was shipwrecked instead of arriving at his intended destination millennia ago means that we get to see him now. Otherwise he would no doubt have gone the way of most openly displayed bronze sculptures of antiquity, melted into pots, pans, weapons, what have you, especially dressed the way he is. Caught in mid-twirl of his ecstatic dance, the Satyr offers a provocative argument for the mythical wild dancing of the satyrs of antiquity being the ancestor of the whirl of the dervishes still practiced in Bacchus’ original stomping ground of Asia Minor. Other than the Satyr, the only artifacts displayed in this beautiful little church are some barnacle-encrusted shipping vessels and one magnificent life-size bronze elephant foot.